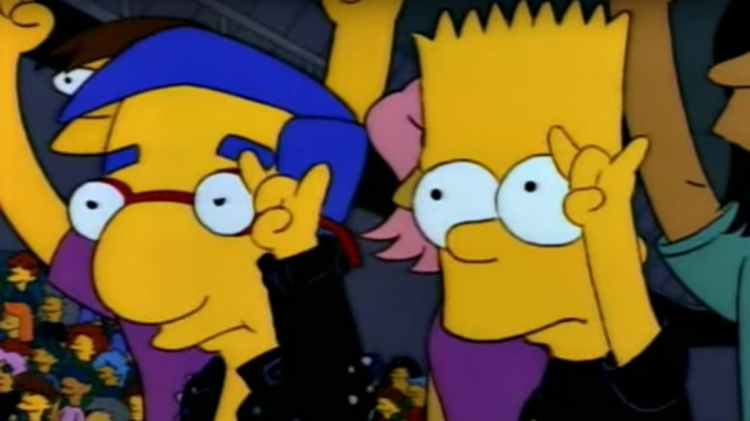 I am a music nerd. I hear a song I like, I read up about the artist, their past work, their lives. I grab their old albums and dive deep into their work, sometimes with disappointing results. There are a lot of albums out there that should have been a single or at most an EP.

The lyrics are the part of a song that I focus on primarily. You ever been to a concert and been stuck beside some loudmouth who bellowed along with every song? Sorry! I can’t help myself, nor do I want to stop singing along.

And for the first time in possibly forever, I went with a friend who loves music as much as I do, my friend Sue.

As we sat around between opening acts and hoped that there would be food left in the food trucks for us, I discovered a shocking fact: Sue loved the music much more than the lyrics. How could this be???

I had assumed that she loved the music in the same way I did, and it blew my mind that someone could be as equally devoted to a song as I was but for a completely different reason.

Don’t get me wrong, the music part is important to me too. Otherwise, I’d be sitting around grooving to poets doing spoken word. (shudder). But I thought the lyrics were always the star for me. The bands I love (The National, The Hold Steady, The Tragically Hip as examples) are storytellers, and I am a sucker for a narrative. I chew it up and wonder how those characters got to that point (which triggers my own storytelling gland).

Imagine my surprise when I discovered songs that I loved despite not being able to sing along with them. Both songs are by Greg Dulli, from two different bands that he helmed.

There’s something about this song that activates the primal part of my animal brain. It floods me with imaginary memories of that pure and joyful lust that comes at the first blush of infatuation. No guilt or doubt, just two people starving for each other.

This one has some sense of romance to it, but it asks more questions that it answers. It makes me think of two people driving around in the lost hours of the night. A pause before whatever happens next, good or bad. Delaying the inevitable next step forward.

And as much as I love both of these songs, singing along with them doesn’t give me the same thrill as shouting along to my other favourites. These two songs skip the verbal part of my brain and go straight to the emotional section, and that is a mildly unsettling experience for me. I am all about words, words, words.

I’m not trying to use Orwellian doublespeak on you, I promise. I have to tell you about my toilet troubles.

Wait, where are you going? Why are you running away with a disgusted look on your—oh, I get it. I just said that sentence out loud. No, this won’t be a story about bodily functions. My toilet tank got a crack and a leak.

And after an unsuccessful attempt to cheaply patch it with silicone goop, I escalated the repair process. Time to replace the tank!

You may not have delved into the exciting world of uncertainty that is household repairs, so let me tell you it is maddening. I live in a 50 year old town house. It is made almost entirely of poured concrete, so you can’t move pipes or drains. My toilets are also 50 years old, and are special models to accommodate the aforementioned drain restrictions. Is it easy to find a replacement tank for a specialty toilet from the Seventies? GOOD GOD NO.

But I thought it would be easy, so I tried it. Bought a tank, got it home, realized it wouldn’t fit, and had a little cry. Then I went back to the internet, furiously googling in search of a hail mary solution. Nothing.

So I steeled myself for an in-person interaction with a gruff plumber, and went down to the plumbing supply store. I walked in and boldly admitted that I was stumped and needed help. I had a suspicion about the answer I was going to receive, but I held out hope.

Hope denied. The gruff plumber humouring my request broke the news to me without hesitation. “You’re not gonna find a replacement tank for that” he said after taking one look at the photo of my old weird toilet. The good news is that they can order and install a new specialty toilet for me, for the heart-attack-inducing price of $1000. Thousand dollar toilet??? And it doesn’t play music or automatically bathe your nethers clean???

My inclination is to put this in the ‘loss’ column and feel bad about failing, but I am attempting to adjust my perspective. I put in the work, I researched, and I reached out to an expert. These are all successes.

And the end result is that I have successfully identified that this repair is outside of my ability to address. I could have chosen to avoid the expert, tried another tank that would not have fit, all the while wasting time and money. Instead, I will mark this as a victory, congratulate myself for an exemplary effort, and head down to the corner to dance for nickels. Thousand dollar toilets don’t pay for themselves.

I have now seen Rise of Skywalker, and it certainly is an ending. I appreciate how impossible the task was, to wrap up a 9 movie series (or 11 movies+countless other official Star Wars projects). No matter what road they took, at least 30% of the fans would hate it. They made their choices, they finished the story arc, and we can move on with our lives if we want.

Yeah, yeah I could get up on my critical high horse and complain about all the things in ROS and the SW series in general that I didn’t like. It’s easy to criticize (fun too!) but ultimately complaining about things leads to a bad vibe that I want less of in my life. Turn it around, and instead of emphasizing the negative, I’m going to celebrate the positive.

Fair warning though: these moments are being filtered through my particular way of seeing things, and they may have nothing to do with the original intent of the scene. So here we go with 5 of my favourite scenes.

#1: Restorin’ order with the Vader (Empire Strikes Back) 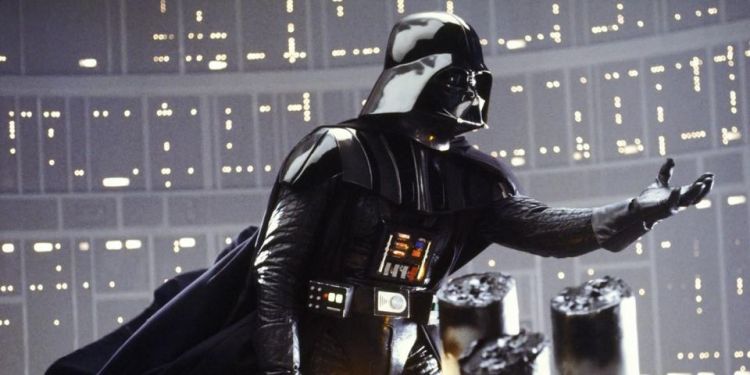 This scene defines Vader as I imagine him. He’s pleading with his son to join with him so that they can restore order to the galaxy. Not for personal reward, but for the good of the galaxy. This doesn’t mean that Vader isn’t evil. No no. He’s decided that the ends justify the means, and those means are villainous. But he believes (or tells himself, anyway) that the cost is worth paying, if it ends the chaos gripping the galaxy. What if he has spent years trying to persuade the Jedi to step in and end the chaos, only to watch them smugly stay un-involved as regular people suffer? What if, in desperation, he decided that the only way to end the chaos was to become a Sith Lord so that he could gain enough strength to kill the Emperor? 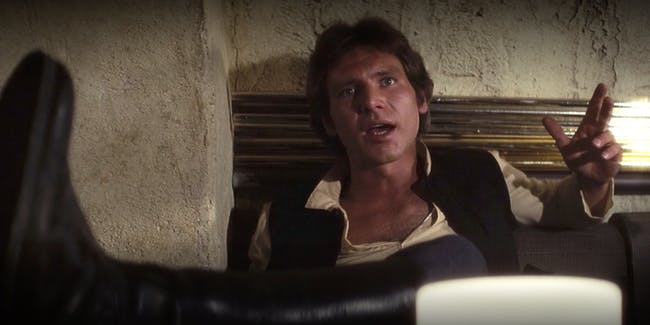 Han. Shoots. First. Sorry Greedo, but he knew what you were going to do and that the only way to stay out of Jabba’s clutches was to blast your scaly ass from under the table. Han’s not big on the noble ideals of fair fights and honorable duels. He is a big fan of staying alive. 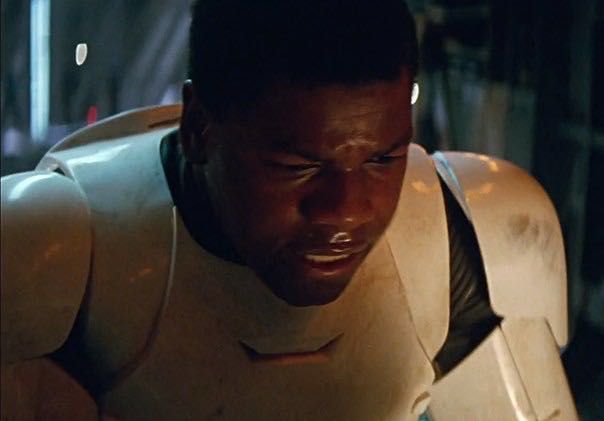 “This is wrong.” This is the sudden realization that Finn has, an epiphany that breaks the programming that has been brainwashed into him since childhood. The trouble is, it doesn’t all of the programming. He still believes that the First Order is unbeatable and omnipotent. He is caught in a crisis of identity. Finn is driven by the trauma he’s experienced and is reacting accordingly. He is terrified of them, and so he runs. 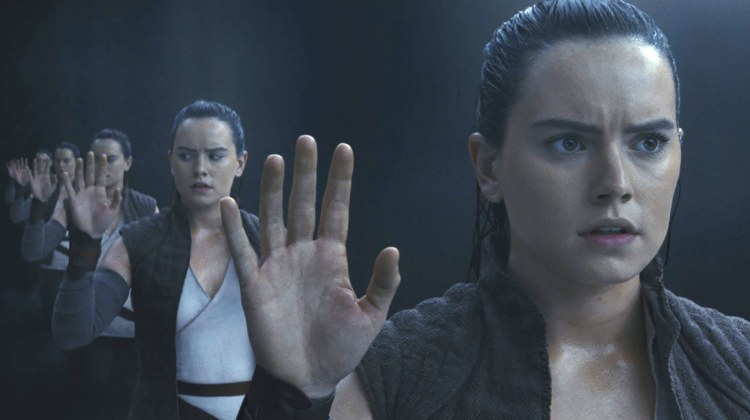 I loved this moment for a bunch of different reasons. The despair of learning that you are alone and disconnected from any sense of identity that comes from family is Dark Side seduction at its finest. It subverts the audience’s expectations and challenges them to think about what it would mean if Rey was a powerful nobody. The force does not care who your parents were. It also deflates the ‘divine right of kings’ motif of Force power, where only the elite families have a connection to the force. And it contrasts with Kylo Ren’s massive sense of entitlement due to his lineage.

#5 Rey and Kylo kick ass together. (The Last Jedi) 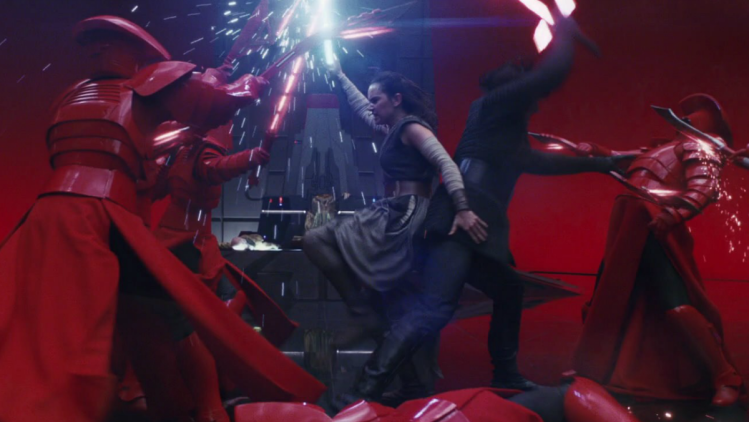 The fight in Snoke’s throne room, after the lumpy villain has been killed, is my very favourite lightsaber battle. It is visceral and raw. There is a complete absence of nonsense gymnastics. And the uneasy and uncertain alliance between Rey and Kylo is communicated clearly despite the lack of dialogue.

My ranking of the Star Wars movies (except Solo because I have not gotten around to seeing it), from best to worst.

#5 Return of the Jedi

(this is a space to prepare myself for ranking the utter garbage that is the prequels. Ok, I think I’m ready)

#10 Revenge of the Sith, a movie so bad that I will eventually write fan fiction with my version of events.